TOWER OF BONES
The Novel
by
Connie J Jasperson

Staggering as he lands hard on his feet, Edwin Farmer looks at his surroundings, startled and completely disoriented. Nothing is as it should be. The huge arc of the sky is dark and unfamiliar stars are brightly shining. The moon hangs high over the horizon, lighting the plain that spreads out before him.  In the distance, a campfire beckons. With his first steps toward that flickering light, Edwin begins the journey of a lifetime.

Forced to become a warrior and a mage, he must transform himself from farm-boy to the hero he was born to be. Prophecy sends Edwin to the one place he never wanted to be, fighting a desperate battle to rescue the woman he loves, but has only met in his dreams.

The Gods are at war and Neveyah is the battleground. Magic and destiny lie waiting in the Tower of Bones.

Once, long ago, Neveyah was one world.  The Goddess Aeos, Goddess of Hearth and Home guarded it well.  Neveyah bordered upon the world of Cascadia, domain of the Mountain God Ariend.  Ariend was the husband of Aeos, and their worlds lived in harmony and peace.  Neveyah and Cascadia  touched upon the worlds of the other Gods, and all the peoples and creatures of the eleven worlds passed freely from one world to another.

Then came the day when Tauron, the Bull God, God of the desert world of Serende desired to make Aeos his wife. Pretending to seek counsel with Ariend, Tauron took him by surprise, sealing him alive into the haft of a giant spear carved from the very mountains of Cascadia. This spear Tauron then thrust into the earth, creating an immense crater valley. He then began taking Ariend's world, subverting his people.

Aeos, seeking her husband everywhere at last came upon the spear. Seeing her husband entombed there, she begged her mother to help her free him.  The Mother of All was unable to leave the sky, but sent the Almighty Father to help Aeos. He, constrained by the laws of the universe, was unable to free his son, but together with Aeos he devised a plan whereby his son Ariend would one day be free, though it would take many generations.

Despite Tauron's desperate pleas, Aeos refused to wed him, saying 'My husband still lives within the prison of your making. I will oneday free him and all your work will have been for naught.'

Tauron went away, weeping.  He descended even further into madness, and was filled with the obsession to wed Aeos no matter what the cost.

Thus began the War of the Gods, which is played out in the Valley of Mal Evol, which means 'Valley of Sorrows'. 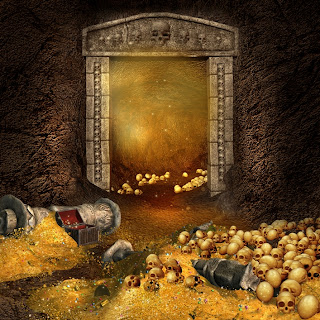 Posted by Connie J Jasperson at 7:56 PM No comments: