Work is rapidly progressing on the prequel to the Tower of Bones Series.  I am currently writing the final battle scene, and my trusted friend Irene is reading and checking for inconsistencies as I go. Once I have the MS done to the best of my ability it will go to the fabulous Carlie Cullen and we will begin the editing process.  By late this year, this book will be published if we stay on track as we are now. 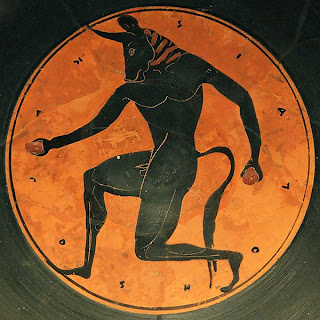 The bad-ass in this tale is a Minotaur, Kandek.

Kandek is the Highest Priest of the Bull God, Tauron, and he is terrifying. His own people wet their pants when he turns his eyes toward them.

In the world of Neveyah, Minotaurs are the Soldiers of Tauron. They were born normal men, but they've proven by their strength and physical prowess that they are worthy to undergo the terrible ritual that changes them from a normal man to a Minotaur.

The only way for man born into the culture of Serende, Tauron's world, to marry or own property is for him to rise through the ranks of the Legions of Tauron. Thus, every boy trains from birth to be a warrior, and every boy undergoes the Remaking at the age of fourteen, or the age of majority in their culture.

This is why the Legions of Tauron seem to be endless to our embattled heroes in later books. Tauron has no need to use finesse in matters of warfare--he uses sheer numbers overwhelm the opposition.

I am very close to having the entire first draft of this story done.

Posted by Connie J Jasperson at 11:41 AM